Hundreds of young age group and international athletes were on the receiving end of the most vicious weather conditions in years on Saturday 9th November. Continuous rain and 3 degree temperatures produced a mud bath course, which commendably did not affect the large turn out across all age groups.

The testing weather conditions, provided for some excellent races, with athletes battling the rain and wind as well as their competitors. It came as no surprise in the Women’s 5K race when, Rio Olympian Michelle Finn dictated the pace from the start along with GB international Mhairi MacLennan. These two seemed to be least affected by the energy sapping mud and battled for the lead for much of the race before Finn eventually broke away in the closing stages.

The 29 year old, who was racing for the first time following her steeplechase event in the Doha World Championships, finally crossed the line for a 3 secs victory margin. Second went to the battling MacLennan who was 32nd in this year’s World Championships in Denmark.

Next came NI & Ulster athlete, Fionnuala Ross from Armagh AC who was well clear of 4th placer Lucy Marland of Wales. The top 6 were completed by Ireland’s Jodie McCann and Olivia Gwynn of Wales.

A pleased Finn said: “This mud fest couldn’t be more different from my steeplechase in Doha. I finally got away from Mhairi on the uphill sections. I didn’t know what to expect here after taking a break following the World Championships. I will now try to qualify for the Irish team for the Euro Cross Country before training in Australia to help me qualify for the Tokyo Olympics “.

A delighted Ross said that despite the conditions it suited her as she thrives in the mud. The Scottish 10,000 metres champion said she was aiming for a Spring marathon following her recent 2 hrs 47 mins time in Berlin.

After a tough battle in the Men’s 8K race, the honours went to GB’s Adam Craig from Inverclyde who finished 4secs ahead of James Hunt of Wales. Craig is currently on a high following a recent PB in the Leeds Abbey Dash 10k of 28 mins 45 secs. 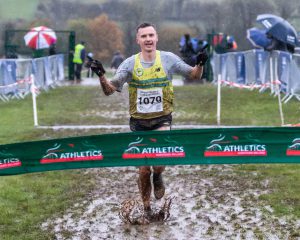 Adam commented: “That was very tough with endless slipping and sliding, however it clearly suited me. I will be racing in the Liverpool Challenge in 2 weeks where I hope to get my first International vest to represent GB in the Euro Cross .”

Ieuan Thomas of Wales was 3rd some way ahead of a delighted Conor Bradley of City of Derry AC Spartans, who was the first man for both the City of Derry Spartans and the NI & Ulster teams. Next came Ciarán Lewis of Wales and Springwell Running Club’s Neill Johnston.

Conor said: “I am very happy, though the course was very challenging. Those conditions aren’t my style. However I am going well at present and will be aiming for a slot on the Irish team for the Euros in the Trials in 2 weeks“. 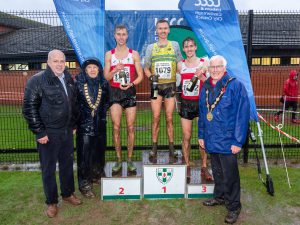 It was a testing day for the NI & Ulster youth athletes who, despite the weather, turned out in the hundreds to take part in the Uneven Age Group Championships. With some changes made to the timetable to accommodate the schools transfer tests, the day started with the U15 Girls who competed over a 3000m race.

Next to take to the increasingly-muddy course was the U15 boys, where City of Lisburn AC’s Jack McCausland took 1st place. He was followed by Flionn McLaughlin (City of Derry Spartans AC) in 2nd and Kyle Thompson (Loughview AC) in 3rd place.

St Malachy’s AC claimed both 1st and 2nd place in the U19 Boys, with Adam Ferris in 1st place and Tony McCambridge in 2nd place. They were followed by Conor Maguire (Monaghan Phoenix AC) in 3rd place.

The U11 Girls race was won by Erelle O’Sullivan (Shercock AC) with Kari Foster (Willowfield Harriers) in 2nd place. They were followed by Cliodhna McBride (Cranford AC) as the 3rd U11 girl.

The final Age Group races of the day were the U13 Girls and Boys events. Lagan Valley AC’s Isa McCarron had a strong finish to take 1st place, ahead of Emer McKee (Willowfield Harriers) in 2nd place and Rebecca Moore (City of Lisburn AC) in 3rd place. In the Boys U13 event, Cranford AC’s Caolan McFadden claimed the top spot, with Fionn McNamara (Annalee AC) in 2nd place and Daniel McLornan (Ballymena & Antrim AC) in 3rd. 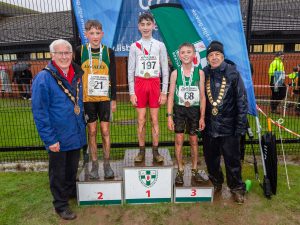 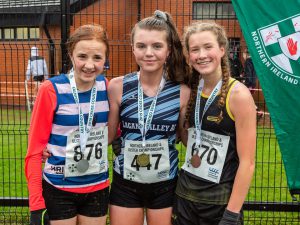 A number of Northern Irish and Ulster athletes competed in the Irish Schools Indoor Combined Events on Saturday 9th November at the AIT in Athlone.

next
High Hamstring Tendinopathy... a persistent pain in the Butt